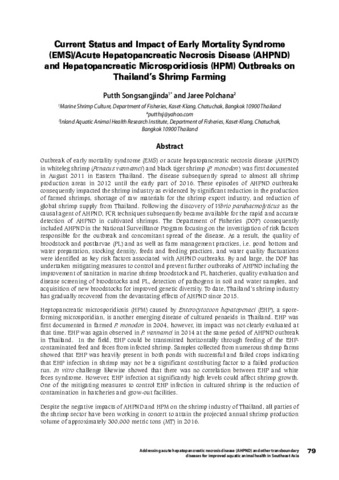 Outbreak of early mortality syndrome (EMS) or acute hepatopancreatic necrosis disease (AHPND) in whiteleg shrimp (Penaeus vannamei) and black tiger shrimp (P. monodon) was first documented in August 2011 in Eastern Thailand. The disease subsequently spread to almost all shrimp production areas in 2012 until the early part of 2016. These episodes of AHPND outbreaks consequently impacted the shrimp industry as evidenced by significant reduction in the production of farmed shrimps, shortage of raw materials for the shrimp export industry, and reduction of global shrimp supply from Thailand. Following the discovery of Vibrio parahaemolyticus as the causal agent of AHPND, PCR techniques subsequently became available for the rapid and accurate detection of AHPND in cultivated shrimps. The Department of Fisheries (DOF) consequently included AHPND in the National Surveillance Program focusing on the investigation of risk factors responsible for the outbreak and concomitant spread of the disease. As a result, the quality of broodstock and postlarvae (PL) and as well as farm management practices, i.e. pond bottom and water preparation, stocking density, feeds and feeding practices, and water quality fluctuations were identified as key risk factors associated with AHPND outbreaks. By and large, the DOF has undertaken mitigating measures to control and prevent further outbreaks of AHPND including the improvement of sanitation in marine shrimp broodstock and PL hatcheries, quality evaluation and disease screening of broodstocks and PL, detection of pathogens in soil and water samples, and acquisition of new broodstocks for improved genetic diversity. To date, Thailand s shrimp industry has gradually recovered from the devastating effects of AHPND since 2015. Heptopancreatic microsporidiosis (HPM) caused by Enterocytozoon hepatopenaei (EHP), a sporeforming microsporidian, is another emerging disease of cultured penaeids in Thailand. EHP was first documented in farmed P. monodon in 2004, however, its impact was not clearly evaluated at that time. EHP was again observed in P. vannamei in 2014 at the same period of AHPND outbreak in Thailand. In the field, EHP could be transmitted horizontally through feeding of the EHPcontaminated feed and feces from infected shrimp. Samples collected from numerous shrimp farms showed that EHP was heavily present in both ponds with successful and failed crops indicating that EHP infection in shrimp may not be a significant contributing factor to a failed production run. In vitro challenge likewise showed that there was no correlation between EHP and white feces syndrome. However, EHP infection at significantly high levels could affect shrimp growth. One of the mitigating measures to control EHP infection in cultured shrimp is the reduction of contamination in hatcheries and grow-out facilities. Despite the negative impacts of AHPND and HPM on the shrimp industry of Thailand, all parties of the shrimp sector have been working in concert to attain the projected annual shrimp production volume of approximately 300,000 metric tons (MT) in 2016.