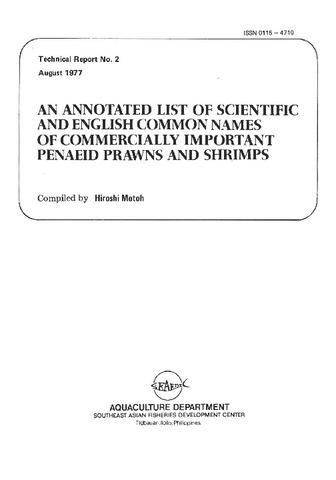 There are 318 species of penaeid shrimps (Family Penaeidae) recorded in the world, of which about 80 species are placed under exploitation in fishing industry and/or cultivated artificially. The species under the genus Penaeus are particularly favored for human consumption because of their larger size and palatability and are therefore exposed to extensive capture by fishing boats. The shrimp fishing industry has developed in various parts of coastal waters worldwide extending from the temperate to tropical zones in both hemispheres. The nations engaged in shrimp fishing are numerous; Japan, U.S.A., Mexico, Thailand, India, lead in terms of volume of catch. Japan, for instance one of the large shrimp consuming nations in the world, has been dispatching shrimp fishing boats to many countries whether on her own capital or in joint ventures. Japan annually imports some 100,000 tons of frozen shrimp of which penaeids rank first in quantity. Meanwhile, the demand for shrimp is expected to rise in the years to come. The shrimp fishing industry and its operation are conducted and managed naturally, as indicated above, under international agreement. However, confusions arise particularly regarding the common names of shrimp caught or the products. It is evident that many commercial species of penaeids are given common names which differ from one country to another. For instance, the so-called "white shrimp" adopted by commercial circles includes nine different species. Understandably, these nine species, aside form being closely related biologically, are characterized by whitish coloration of the body. The present list was compiled to show the status of shrimp nomenclature, based on available literature, giving scientific names and English common names adopted or applied. The present article is written in the hope that the common names of penaeid shrimp shall be standardized internationally at least in English. Needless to say, the standardization will contribute greatly to world trading, as well as to scientific studies.