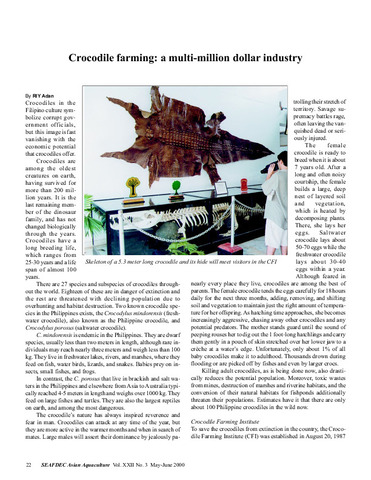 Crocodiles have a long breeding life, which ranges from 25-30 years. There are 27 species and subspecies of crocodiles throughout the world, 18 of which are in danger of extinction, the rest being threatened with declining population due to overhunting and habitat destruction. Two known crocodile species exist in the Philippines: Crocodylus mindorensis (freshwater crocodile) and C. porosus (saltwater crocodile). Killing adult crocodiles, as is being done now, drastically reduces the potential population. Moreover, toxic wastes from mines, destruction of marshes and riverine habitats, and the conversion of their natural habitats for fishponds additionally threaten their populations. Estimates indicate that there are only about 100 Philippine crocodiles in the wild now. The Crocodile Farming Institute (CFI) was established in Palawan, in 1987, in order to save the crocodiles from extinction in the Philippines. It is now one of the components of the Palawan Wildlife and Conservation Center, and aims to conserve the 2 endangered species in the Philippines and also to develop and introduce a suitable crocodile farming technology that will help uplift the socio-economic well-being of the Filipino people. CFI believes in the potential of commercial utilization of crocodiles as a dollar-generating industry for the Philippines. It is a very profitable business and could be a multi-million dollar industry. A brief outline is given of the economic and marketing potentials of farming crocodiles in the Philippines.