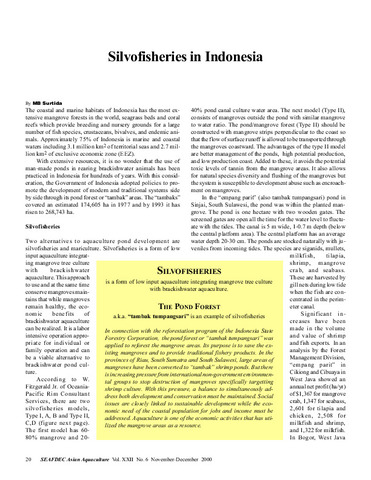 The coastal and marine habitats of Indonesia has the most extensive mangrove forests in the world, seagrass beds and coral reefs which provide breeding and nursery grounds for a large number of fish species, crustaceans, bivalves, and endemic animals. Approximately 75% of Indonesia is marine and coastal waters including 3.1 million km2 of territorial seas and 2.7 million km2 of exclusive economic zone (EEZ).With extensive resources, it is no wonder that the use of man-made ponds in rearing brackishwater animals has been practiced in Indonesia for hundreds of years. With this consideration, the Government of Indonesia adopted policies to promote the development of modern and traditional systems side by side through its pond forest or "tambak" areas. The "tambaks" covered an estimated 174,605 ha in 1977 and by 1993 it has risen to 268,743 ha.