The Agusan marsh: A situationer with focus on scientific aspects 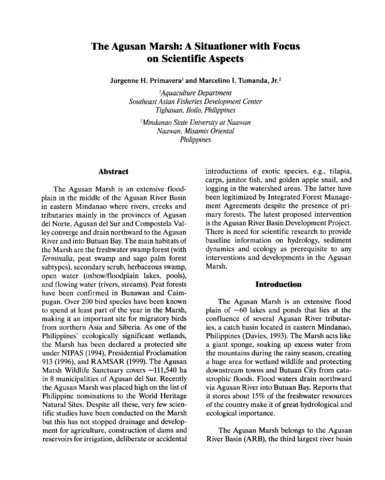 The Agusan Marsh is an extensive floodplain in the middle of the Agusan River Basin in eastern Mindanao where rivers, creeks and tributaries mainly in the provinces of Agusan del Norte, Agusan del Sur and Compostela Valley converge and drain northward to the Agusan River and into Butuan Bay. The main habitats of the Marsh are the freshwater swamp forest (with Terminalia, peat swamp and sago palm forest subtypes), secondary scrub, herbaceous swamp, open water (oxbow/floodplain lakes, pools), and flowing water (rivers, streams). Peat forests have been confirmed in Bunawan and Caimpugan. Over 200 bird species have been known to spend at least part of the year in the Marsh, making it an important site for migratory birds from northern Asia and Siberia. As one of the Philippines' ecologically significant wetlands, the Marsh has been declared a protected site under NIP AS (1994), Presidential Proclamation 913 (1996), and RAMSAR (1999). The Agusan Marsh Wildlife Sanctuary covers -111,540 ha in 8 municipalities of Agusan del Sur. Recently the Agusan Marsh was placed high on the list of Philippine nominations to the World Heritage Natural Sites. Despite all these, very few scientific studies have been conducted on the Marsh but this has not stopped drainage and development for agriculture, construction of dams and reservoirs for irrigation, deliberate or accidental introductions of exotic species, e.g., tilapia, carps, janitor fish, and golden apple snail, and logging in the watershed areas. The latter have been legitimized by Integrated Forest Management Agreements despite the presence of primary forests. The latest proposed intervention is the Agusan River Basin Development Project. There is need for scientific research to provide baseline information on hydrology, sediment dynamics and ecology as prerequisite to any interventions and developments in the Agusan Marsh.