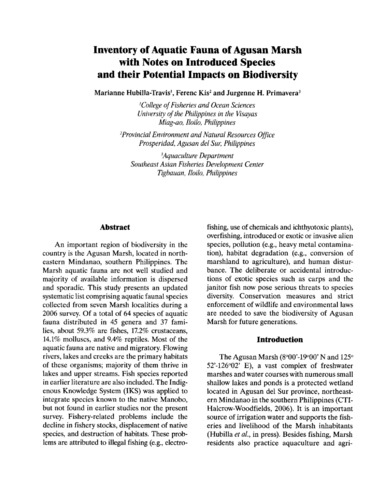 An important region of biodiversity in the country is the Agusan Marsh, located in northeastern Mindanao, southern Philippines. The Marsh aquatic fauna are not well studied and majority of available information is dispersed and sporadic. This study presents an updated systematic list comprising aquatic faunal species collected from seven Marsh localities during a 2006 survey. Of a total of 64 species of aquatic fauna distributed in 45 genera and 37 families, about 59.3% are fishes, 17.2% crustaceans, 14.1% molluscs, and 9.4% reptiles. Most of the aquatic fauna are native and migratory. Flowing rivers, lakes and creeks are the primary habitats of these organisms; majority of them thrive in lakes and upper streams. Fish species reported in earlier literature are also included. The Indigenous Knowledge System (IKS) was applied to integrate species known to the native Manobo, but not found in earlier studies nor the present survey. Fishery-related problems include the decline in fishery stocks, displacement of native species, and destruction of habitats. These problems are attributed to illegal fishing (e.g., electrofishing, use of chemicals and ichthyotoxic plants), overfishing, introduced or exotic or invasive alien species, pollution (e.g., heavy metal contamination), habitat degradation (e.g., conversion of marshland to agriculture), and human disturbance. The deliberate or accidental introductions of exotic species such as carps and the janitor fish now pose serious threats to species diversity. Conservation measures and strict enforcement of wildlife and environmental laws are needed to save the biodiversity of Agusan Marsh for future generations.