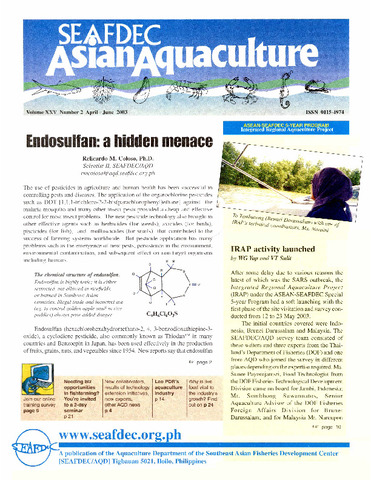 A clean and healthy environment is paramount to human existence. While pesticide use has successfully sustained agricultural and food production in our lifetime as well as safeguarded human health by controlling insect pests, it has also caused many tragedies including population declines in our wildlife, fatalities in workers exposed to pesticides in its manufacture and use, and the increasing incidence of dreaded human illnesses such as cancer. A delicate balance should be achieved to mitigate the adverse impact of pesticide use to the environment and at the same time ensuring short- and long-term agricultural productivity. Endosulfan has been effectively used as a pesticide, but much evidence on its chronic and sub-lethal effects on humans and wildlife have been gathered in recent years. More research still needs to be done to determine its effects from long-term exposure at very low levels. Endosulfan is highly toxic to fish and other aquatic animals and, thus, not recommended for use in aquatic ecosystems. However, in some countries, it has been incorrectly used as a molluscicide in rice paddies, which could have an adverse impact on the rice-fish farming systems and on other surrounding aquatic ecosystems. It is clear that such practices should be stopped and users must strictly observed the recommended application methods. Agricultural productivity should be achieved with less pesticide by using integrated pest management programs which make use of biological, cultural, and physical control agents and lower doses of safer pesticide on a need only basis. The benefits of biotechnology should also be used to develop more effective and safer products and techniques. This is a valid approach and one that will require a unified and concerted effort among suppliers and users of pesticides in order to ensure that resources are used to our best advantage with minimal risk.