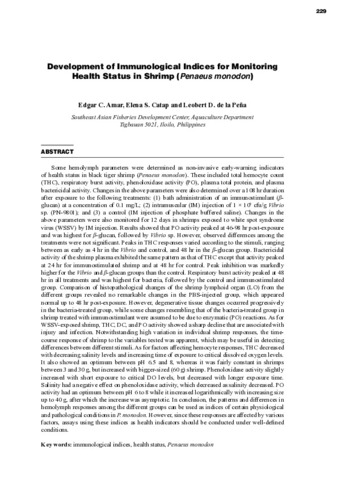 Some hemolymph parameters were determined as non-invasive early-warning indicators of health status in black tiger shrimp (Penaeus monodon). These included total hemocyte count (THC), respiratory burst activity, phenoloxidase activity (PO), plasma total protein, and plasma bactericidal activity. Changes in the above parameters were also determined over a 108 hr duration after exposure to the following treatments: (1) bath administration of an immunostimulant (β-glucan) at a concentration of 0.1 mg/L; (2) intramuscular (IM) injection of 1 × 106 cfu/g Vibrio sp. (PN-9801); and (3) a control (IM injection of phosphate buffered saline). Changes in the above parameters were also monitored for 12 days in shrimps exposed to white spot syndrome virus (WSSV) by IM injection. Results showed that PO activity peaked at 46-98 hr post-exposure and was highest for β-glucan, followed by Vibrio sp. However, observed differences among the treatments were not significant. Peaks in THC responses varied according to the stimuli, ranging between as early as 4 hr in the Vibrio and control, and 48 hr in the β-glucan group. Bactericidal activity of the shrimp plasma exhibited the same pattern as that of THC except that activity peaked at 24 hr for immunostimulated shrimp and at 48 hr for control. Peak inhibition was markedly higher for the Vibrio and β-glucan groups than the control. Respiratory burst activity peaked at 48 hr in all treatments and was highest for bacteria, followed by the control and immunostimulated group. Comparison of histopathological changes of the shrimp lymphoid organ (LO) from the different groups revealed no remarkable changes in the PBS-injected group, which appeared normal up to 48 hr post-exposure. However, degenerative tissue changes occurred progressively in the bacteria-treated group, while some changes resembling that of the bacteria-treated group in shrimp treated with immunostimulant were assumed to be due to enzymatic (PO) reactions. As for WSSV-exposed shrimp, THC, DC, and PO activity showed a sharp decline that are associated with injury and infection. Notwithstanding high variation in individual shrimp responses, the time-course response of shrimp to the variables tested was apparent, which may be useful in detecting differences between different stimuli. As for factors affecting hemocyte responses, THC decreased with decreasing salinity levels and increasing time of exposure to critical dissolved oxygen levels. It also showed an optimum between pH 6.5 and 8, whereas it was fairly constant in shrimps between 3 and 30 g, but increased with bigger-sized (60 g) shrimp. Phenoloxidase activity slightly increased with short exposure to critical DO levels, but decreased with longer exposure time. Salinity had a negative effect on phenoloxidase activity, which decreased as salinity decreased. PO activity had an optimum between pH 6 to 8 while it increased logarithmically with increasing size up to 40 g, after which the increase was asymptotic. In conclusion, the patterns and differences in hemolymph responses among the different groups can be used as indices of certain physiological and pathological conditions in P. monodon. However, since these responses are affected by various factors, assays using these indices as health indicators should be conducted under well-defined conditions.