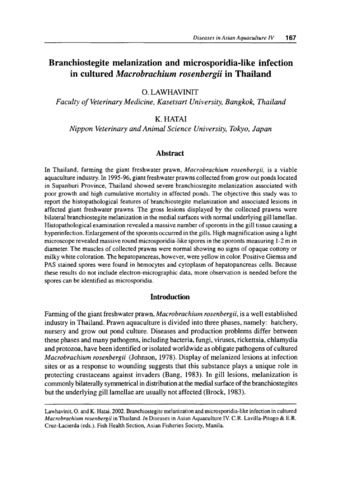 In Thailand, farming the giant freshwater prawn, Macrobrachium rosenbergii, is a viable aquaculture industry. In 1995-96, giant freshwater prawns collected from grow out ponds located in Supanburi Province, Thailand showed severe branchiostegite melanization associated with poor growth and high cumulative mortality in affected ponds. The objective this study was to report the histopathological features of branchiostegite melanization and associated lesions in affected giant freshwater prawns. The gross lesions displayed by the collected prawns were bilateral branchiostegite melanization in the medial surfaces with normal underlying gill lamellae. Histopathological examination revealed a massive number of sporonts in the gill tissue causing a hyperinfection. Enlargement of the sporonts occurred in the gills. High magnification using a light microscope revealed massive round microsporidia-like spores in the sporonts measuring 1-2 m in diameter. The muscles of collected prawns were normal showing no signs of opaque cottony or milky white coloration. The hepatopancreas, however, were yellow in color. Positive Giemsa and PAS stained spores were found in hemocytes and cytoplasm of hepatopancreas cells. Because these results do not include electron-micrographic data, more observation is needed before the spores can be identified as microsporidia.