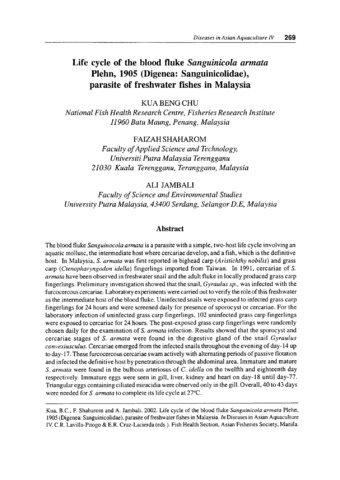 The blood fluke Sanguinocola armata is a parasite with a simple, two-host life cycle involving an aquatic mollusc, the intermediate host where cercariae develop, and a fish, which is the definitive host. In Malaysia, S. armata was first reported in bighead carp (Aristichthys nobilis) and grass carp (Ctenopharyngodon idella) fingerlings imported from Taiwan. In 1991, cercariae of S. armata have been observed in freshwater snail and the adult fluke in locally produced grass carp fingerlings. Preliminary investigation showed that the snail, Gyraulus sp., was infected with the furcocercous cercariae. Laboratory experiments were carried out to verify the role of this freshwater as the intermediate host of the blood fluke. Uninfected snails were exposed to infected grass carp fingerlings for 24 hours and were screened daily for presence of sporocyst or cercariae. For the laboratory infection of uninfected grass carp fingerlings, 102 uninfected grass carp fingerlings were exposed to cercariae for 24 hours. The post-exposed grass carp fingerlings were randomly chosen daily for the examination of S. armata infection. Results showed that the sporocyst and cercariae stages of S. armata were found in the digestive gland of the snail Gyraulus convexiusculus. Cercariae emerged from the infected snails throughout the evening of day-14 up to day-17. These furcocercous cercariae swam actively with alternating periods of passive flotation and infected the definitive host by penetration through the abdominal area. Immature and mature S. armata were found in the bulbous arteriosus of C. idella on the twelfth and eighteenth day respectively. Immature eggs were seen in gill, liver, kidney and heart on day-18 until day-77. Triangular eggs containing ciliated miracidia were observed only in the gill. Overall, 40 to 43 days were needed for S. armata to complete its life cycle at 27°C.