Production and characterization of a monoclonal antibody against Aeromonas hydrophila 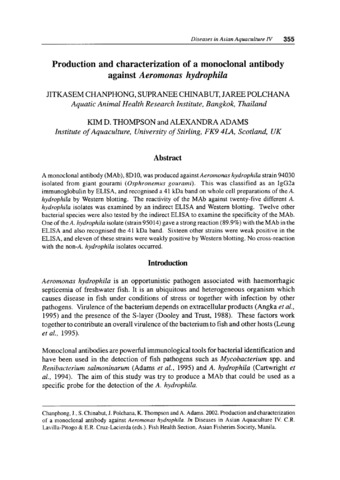 A monoclonal antibody (MAb), 8D10, was produced against Aeromonas hydrophila strain 94030 isolated from giant gourami (Osphronemus gourami). This was classified as an IgG2a immunoglobulin by ELISA, and recognised a 41 kDa band on whole cell preparations of the A. hydrophila by Western blotting. The reactivity of the MAb against twenty-five different A. hydrophila isolates was examined by an indirect ELISA and Western blotting. Twelve other bacterial species were also tested by the indirect ELISA to examine the specificity of the MAb. One of the A. hydrophila isolate (strain 95014) gave a strong reaction (89.9%) with the MAb in the ELISA and also recognised the 41 kDa band. Sixteen other strains were weak positive in the ELISA, and eleven of these strains were weakly positive by Western blotting. No cross-reaction with the non-A. hydrophila isolates occurred.