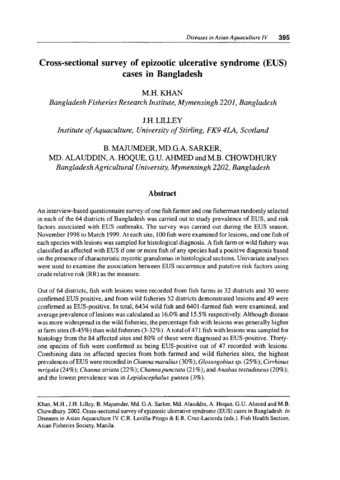 An interview-based questionnaire survey of one fish farmer and one fisherman randomly selected in each of the 64 districts of Bangladesh was carried out to study prevalence of EUS, and risk factors associated with EUS outbreaks. The survey was carried out during the EUS season, November 1998 to March 1999. At each site, 100 fish were examined for lesions, and one fish of each species with lesions was sampled for histological diagnosis. A fish farm or wild fishery was classified as affected with EUS if one or more fish of any species had a positive diagnosis based on the presence of characteristic mycotic granulomas in histological sections. Univariate analyses were used to examine the association between EUS occurrence and putative risk factors using crude relative risk (RR) as the measure. Out of 64 districts, fish with lesions were recorded from fish farms in 32 districts and 30 were confirmed EUS positive, and from wild fisheries 52 districts demonstrated lesions and 49 were confirmed as EUS-positive. In total, 6434 wild fish and 6401-farmed fish were examined, and average prevalence of lesions was calculated as 16.0% and 15.5% respectively. Although disease was more widespread in the wild fisheries, the percentage fish with lesions was generally higher at farm sites (8-45%) than wild fisheries (3-32%). A total of 471 fish with lesions was sampled for histology from the 84 affected sites and 80% of these were diagnosed as EUS-positive. Thirty-one species of fish were confirmed as being EUS-positive out of 47 recorded with lesions. Combining data on affected species from both farmed and wild fisheries sites, the highest prevalences of EUS were recorded in Channa marulius (30%); Glossogobius sp. (25%); Cirrhinus mrigala (24%); Channa striata (22%); Channa punctata (21%); and Anabas testudineus (20%); and the lowest prevalence was in Lepidocephalus guntea (3%). Data showed that there is a significantly higher relative risk of EUS occurring in farmed fish when wild fish are present in the pond; pond embankments are not high enough to prevent in-coming flood water; ponds are connected to natural waters; ponds are not dried or limed prior to stocking; ponds are not limed post-stocking; and pond water colour is black or clear (as opposed to red or green). Of the wild-caught fish, those sampled from haors had a significantly higher relative risk of getting EUS. Fish from rivers and flood plains were at a lower risk of EUS infection.