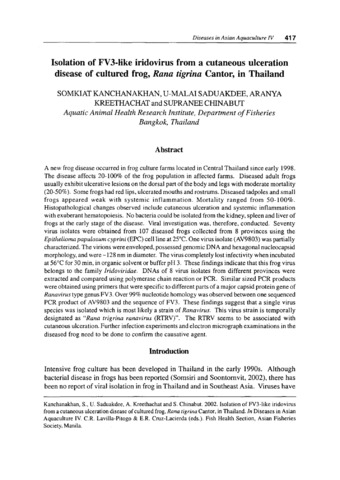 A new frog disease occurred in frog culture farms located in Central Thailand since early 1998. The disease affects 20-100% of the frog population in affected farms. Diseased adult frogs usually exhibit ulcerative lesions on the dorsal part of the body and legs with moderate mortality (20-50%). Some frogs had red lips, ulcerated mouths and rostrums. Diseased tadpoles and small frogs appeared weak with systemic inflammation. Mortality ranged from 50-100%. Histopathological changes observed include cutaneous ulceration and systemic inflammation with exuberant hematopoiesis. No bacteria could be isolated from the kidney, spleen and liver of frogs at the early stage of the disease. Viral investigation was, therefore, conducted. Seventy virus isolates were obtained from 107 diseased frogs collected from 8 provinces using the Epithelioma papulosum cyprini (EPC) cell line at 25°C. One virus isolate (AV9803) was partially characterized. The virions were enveloped, possessed genomic DNA and hexagonal nucleocapsid morphology, and were ~128 nm in diameter. The virus completely lost infectivity when incubated at 56°C for 30 min, in organic solvent or buffer pH 3. These findings indicate that this frog virus belongs to the family Iridoviridae. DNAs of 8 virus isolates from different provinces were extracted and compared using polymerase chain reaction or PCR. Similar sized PCR products were obtained using primers that were specific to different parts of a major capsid protein gene of Ranavirus type genus FV3. Over 99% nucleotide homology was observed between one sequenced PCR product of AV9803 and the sequence of FV3. These findings suggest that a single virus species was isolated which is most likely a strain of Ranavirus. This virus strain is temporally designated as Rana tigrina ranavirus (RTRV) . The RTRV seems to be associated with cutaneous ulceration. Further infection experiments and electron micrograph examinations in the diseased frog need to be done to confirm the causative agent.