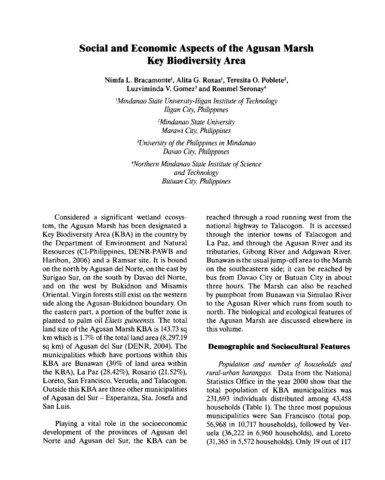 Considered a significant wetland ecosystem, the Agusan Marsh has been designated a Key Biodiversity Area (KBA) in the country by the Department of Environment and Natural Resources (CI-Philippines, DENR-PAWB and Haribon, 2006) and a Ramsar site. It is bound on the north by Agusan del Norte, on the east by Surigao Sur, on the south by Davao del Norte, and on the west by Bukidnon and Misamis Oriental. Virgin forests still exist on the western side along the Agusan-Bukidnon boundary. On the eastern part, a portion of the buffer zone is planted to palm oil Elaeis guineensis. The total land size of the Agusan Marsh KBA is 143.73 sq km which is 1.7% of the total land area (8,297.19 sq km) of Agusan del Sur (DENR, 2004). The municipalities which have portions within this KBA are Bunawan (30% of land area within the KBA), La Paz (28.42%), Rosario (21.52%), Loreto, San Francisco, Veruela, and Talacogon. Outside this KBA are three other municipalities of Agusan del Sur - Esperanza, Sta. Josefa and San Luis. Playing a vital role in the socioeconomic development of the provinces of Agusan del Norte and Agusan del Sur, the KBA can be reached through a road running west from the national highway to Talacogon. It is accessed through the interior towns of Talacogon and La Paz, and through the Agusan River and its tributaries, Gibong River and Adgawan River. Bunawan is the usual jump-off area to the Marsh on the southeastern side; it can be reached by bus from Davao City or Butuan City in about three hours. The Marsh can also be reached by pumpboat from Bunawan via Simulao River to the Agusan River which runs from south to north. The biological and ecological features of the Agusan Marsh are discussed elsewhere in this volume.