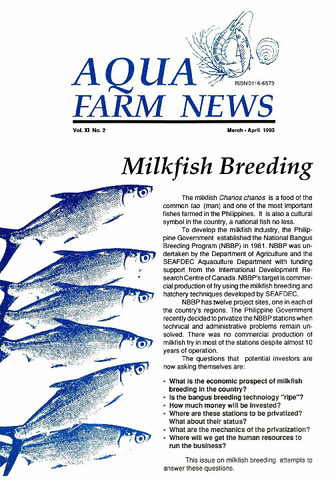 The milkfish Chanos chanos is a food of the common tao (man) and one of the most important fishes farmed in the Philippines. It is also a cultural symbol in the country, a national fish no less. To develop the milkfish industry, the Philippine Government established the National Bangus Breeding Program (NBBP) in 1981. NBBP was undertaken by the Department of Agriculture and the SEAFDEC Aquaculture Department with funding support from the International Development Research Centre of Canada. NBBP's target is commercial production of fry using the milkfish breeding and hatchery techniques developed by SEAFDEC. NBBP has twelve project sites, one in each of the country's regions. The Philippine Government recently decided to privatize the NBBP stations when technical and administrative problems remain unsolved. There was no commercial production of milkfish fry in most of the stations despite almost 10 years of operation. The questions that potential investors are now asking themselves are: • What is the economic prospect of milkfish breeding in the country? • Is the bangus breeding technology "ripe"? • How much money will be invested? • Where are these stations to be privatized? • What about their status? • What are the mechanics of the privatization? • Where will we get the human resources to run the business? This issue on milkfish breeding attempts to answer these questions.