I'd like to invest in aquaculture, what choices do I have? 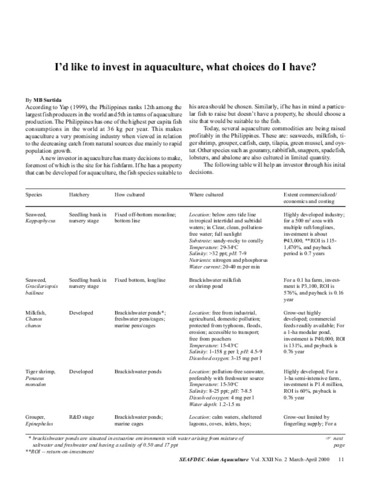 The Philippines, which lies 5th in terms of aquaculture production world-wide, has one of the highest per capita fish consumptions in the world. This makes aquaculture a very promising industry when viewed in relation to the decreasing catch from natural sources, which is due mainly to rapid population growth. A new investor in aquaculture has many decisions to make, foremost of which is the site for the farm. A table is given listing the major species which are being raised profitably in the Philippines. It also includes information as to how and where the species are cultured, the extent to which the sector is commercialized, and economics and costings.