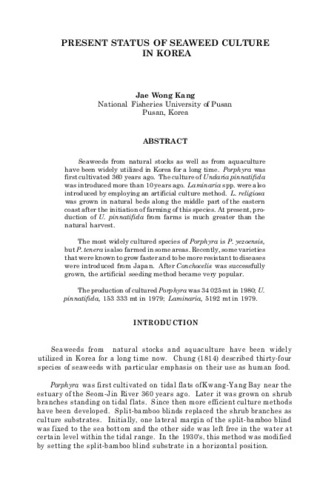 Seaweeds from natural stocks as well as from aquaculture have been widely utilized in Korea for a long time. Porphyra was first cultivated 360 years ago. The culture of Undaria pinnatifida was introduced more than 10 years ago. Laminaria spp. were also introduced by employing an artificial culture method. L. religiosa was grown in natural beds along the middle part of the eastern coast after the initiation of farming of this species. At present, production of U. pinnatifida from farms is much greater than the natural harvest. The most widely cultured species of Porphyra is P. yezoensis , but P. tenera is also farmed in some areas. After Conchocelis was successfully grown, the artificial seedling method became very popular. The production of cultured Porphyra was 34,025 mt in 1980; U. pinnatifida , 153,333 mt in 1979; Laminaria , 5192 mt in 1979.