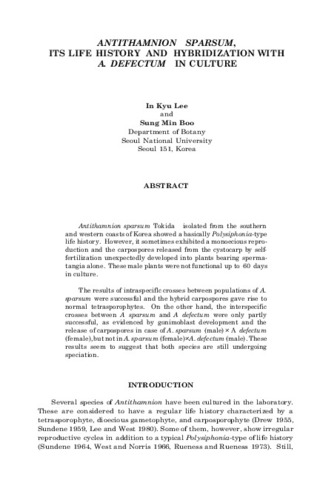 Antithamnion sparsum isolated from the southern and western coasts of Korea showed a basically Polysiphonia -type life history. However, it sometimes exhibited a monoecious reproduction and the carpospores released from the cystocarp by self-fertilization unexpectedly developed into plants bearing spermatangia alone. These male plants were not functional up to 60 days in culture. The results of intraspecific crosses between populations of A. sparsum were successful and the hybrid carpospores gave rise to normal tetrasporophytes. On the other hand, the interspecific crosses between A. sparsum and A. defectum were only partly successful, as evidenced by gonimoblast development and the release of carpospores in case of A. sparsum (male) x A. defectum (female), but not in A. sparsum (female) x A. defectum (male). These results seem to suggest that both species are still undergoing speciation.