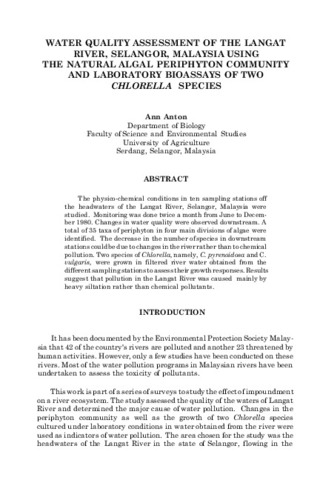 The physico-chemical conditions in 10 sampling stations off the headwaters of the Langat River, Selangor, Malaysia were studied. Monitoring was done twice a month from June to December 1980. Changes in water quality were observed downstream. A total of 35 taxa of periphyton in four main divisions of algae were identified. The decrease in the number of species in downstream stations could be due to changes in the river rather than to chemical pollution. Two species of Chlorella , namely, C. pyrenoidosa and C. vulgaris , were grown in filtered river water obtained from the different sampling stations to assess their growth responses. Results suggest that pollution in the Langat River was caused mainly by heavy siltation rather than chemical pollutants.