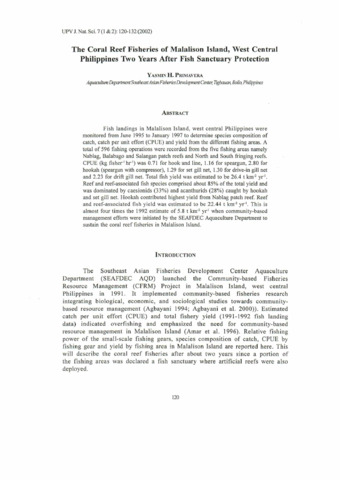 Fish landings in Malalison Island, west central Philippines were monitored from June 1995 to January 1997 to determine species composition of catch, catch per unit effort (CPUE) and yield from the different fishing areas. A total of 596 fishing operations were recorded from the five fishing areas namely Nablag, Balabago and Salangan patch reefs and North and South fringing reefs. CPUE (kg fisher-1 hr-1) was 0.71 for hook and line, 1.16 for speargun, 2.80 for hookah (speargun with compressor), 1.29 for set gill net, 1.30 for drive-in gill net and 2.23 for drift gill net. Total fish yield was estimated to be 26.4 t km-2 yr-1. Reef and reef-associated fish species comprised about 85% of the total yield and was dominated by caesionids (33%) and acanthurids (28%) caught by hookah and set gill net. Hookah contributed highest yield from Nablag patch reef. Reef and reef-associated fish yield was estimated to be 22.44 t km-2 yr-1. This is almost four times the 1992 estimate of 5.8 t km-2 yr-1 when community-based management efforts were initiated by the SEAFDEC Aquaculture Department to sustain the coral reef fisheries in Malalison Island.