Design and construction of a fishpen for an aquaculture-based social laboratory. 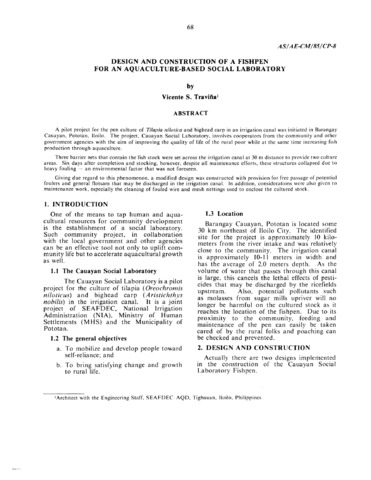 A pilot project for the pen culture of Tilapia nilotica and bighead carp in an irrigation canal was initiated in Barangay Cauayan, Pototan, Iloilo. The project, Cauayan Social Laboratory, involves cooperators from the community and other government agencies with the aim of improving the quality of life of the rural poor while at the same time increasing fish production through aquaculture. Three barrier nets that contain the fish stock were set across the irrigation canal at 30 m distance to provide two culture areas. Six days after completion and stocking, however, despite all maintenance efforts, these structures collapsed due to heavy fouling — an environmental factor that was not foreseen. Giving due regard to this phenomenon, a modified design was constructed with provision for free passage of potential foulers and general flotsam that may be discharged in the irrigation canal. In addition, considerations were also given to maintenance work, especially the cleaning of fouled wire and mesh nettings used to enclose the cultured stock.