Biology and status of aquaculture for giant clams (Tridacnidae) in the Ryukyu Islands, southern Japan 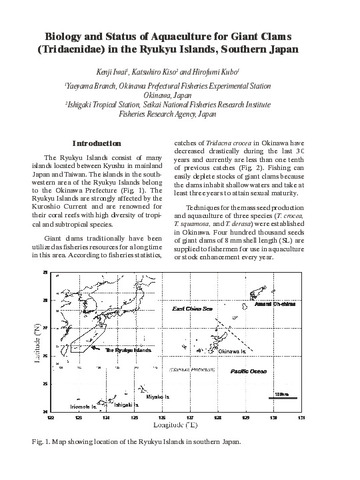 The Ryukyu Islands consist of many islands located between Kyushu in mainland Japan and Taiwan. The islands in the south-western area of the Ryukyu Islands belong to the Okinawa Prefecture. The Ryukyu Islands are strongly affected by the Kuroshio Current and are renowned for their coral reefs with high diversity of tropical and subtropical species. Giant clams traditionally have been utilized as fisheries resources for a long time in this area. According to fisheries statistics, catches of Tridacna crocea in Okinawa have decreased drastically during the last 30 years and currently are less than one tenth of previous catches. Fishing can easily deplete stocks of giant clams because the clams inhabit shallow waters and take at least three years to attain sexual maturity. Techniques for the mass seed production and aquaculture of three species (T. crocea, T. squamosa, and T. derasa) were established in Okinawa. Four hundred thousand seeds of giant clams of 8 mm shell length (SL) are supplied to fishermen for use in aquaculture or stock enhancement every year. This paper will review the (1) biology of giant clams, (2) present status of aquaculture of giant clams in Okinawa, and (3) other studies on giant clams in southern Japan.