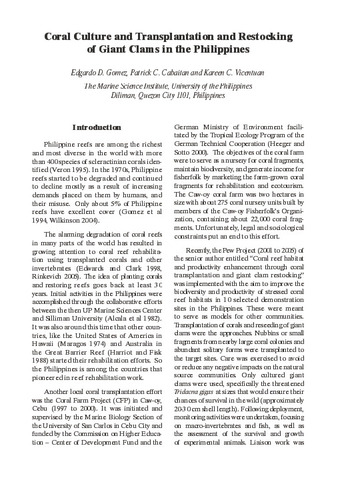 Recently, the Pew Project (2001 to 2005) of the senior author entitled ‘Coral reef habitat and productivity enhancement through coral transplantation and giant clam restocking’ was implemented with the aim to improve the biodiversity and productivity of stressed coral reef habitats in 10 selected demonstration sites in the Philippines. These were meant to serve as models for other communities. Transplantation of corals and reseeding of giant clams were the approaches. Nubbins or small fragments from nearby large coral colonies and abundant solitary forms were transplanted to the target sites. Care was exercised to avoid or reduce any negative impacts on the natural source communities. Only cultured giant clams were used, specifically the threatened Tridacna gigas at sizes that would ensure their chances of survival in the wild (approximately 20-30 cm shell length). Following deployment, monitoring activities were undertaken, focusing on macro-invertebrates and fish, as well as the assessment of the survival and growth of experimental animals. Liaison work was done with local communities to raise their environmental awareness and to ensure their cooperation. This manuscript draws principally from results of the Pew Project. At present, two other restoration projects supported by the European Union and the Global Environment Facility Coral Reef Targeted Research Project are being implemented at the Bolinao Marine Laboratory of the University of the Philippines Marine Science Institute (UP-MSI) in Pangasinan. These projects are testing the efficiency of floating and standing coral nurseries in growing coral nubbins in addition to transplanting fragments or branches of corals to restore degraded coral reefs.