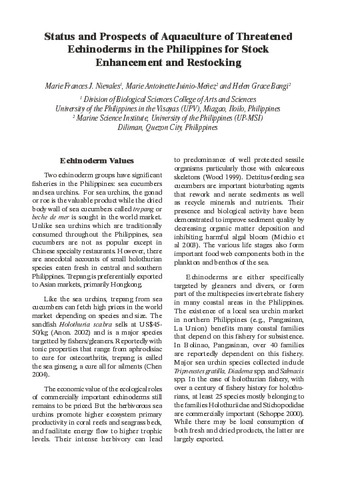 Echinoderms are either specifically targeted by gleaners and divers, or form part of the multispecies invertebrate fishery in many coastal areas in the Philippines. The existence of a local sea urchin market in northern Philippines (e.g., Pangasinan, La Union) benefits many coastal families that depend on this fishery for subsistence. In Bolinao, Pangasinan, over 40 families are reportedly dependent on this fishery. Major sea urchin species collected include Tripneustes gratilla, Diadema spp. and Salmacis spp. In the case of holothurian fishery, with over a century of fishery history for holothurians, at least 25 species mostly belonging to the families Holothuriidae and Stichopodidae are commercially important (Schoppe 2000). While there may be local consumption of both fresh and dried products, the latter are largely exported. Echinoderm fishery is dependent on wild stock. The high demand far exceeding supply, good global market prices and their biology (e.g., slow mobility, shallow water benthic habitat) render them vulnerable to overexploitation. The contribution of echinoderm products to the Philippine economy is substantial. The relative contribution of echinoderm products to the income and socio-economic well-being of fisherfolk who collect these invertebrates is undocumented. However, it has been noted that middlemen, especially local buyers who sell trepang in Manila and Manila-based traders-exporters monopolize the profits (F. Nievales, unpublished data). Products from both echinoderm groups remain in short supply in the country and so trading, limited only by declining natural stock, continues to be lucrative.