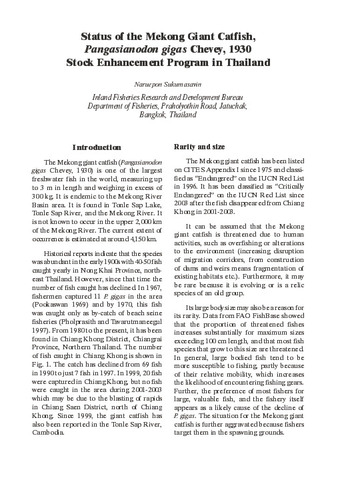 The Mekong giant catfish (Pangasianodon gigas Chevey, 1930) is one of the largest freshwater fish in the world, measuring up to 3 m in length and weighing in excess of 300 kg. It is endemic to the Mekong River Basin area. It is found in Tonle Sap Lake, Tonle Sap River, and the Mekong River. It is not known to occur in the upper 2,000 km of the Mekong River. The current extent of occurrence is estimated at around 4,150 km. Historical reports indicate that the species was abundant in the early 1900s with 40-50 fish caught yearly in Nong Khai Province, north-east Thailand. However, since that time the number of fish caught has declined. This paper discusses several important information about Mekong Giant Catfish, such as rarity and size, natural food, natural spawning season and spawning grounds, and age and size at first maturity. Moreover, the breeding program and the stock enhancement activities of the Thai Department of Fisheries were also presented in the paper.