Status of mud crab industry in the Philippines 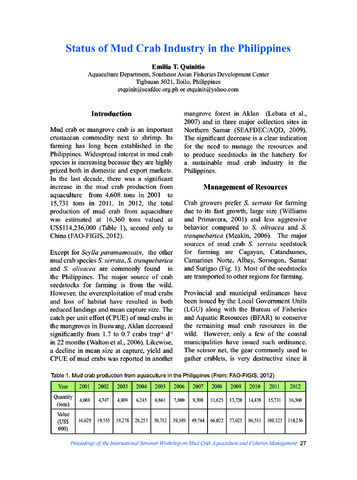 Mud crab farming has long been established in the Philippines. Scylla serrata, S. tranquebarica and S. olivacea are the common species found in the Philippines. S. serrata is the preferred species for farming by crab growers. The total production of mud crab from aquaculture was estimated at 13,720 valued at US$77,025,000 and 14,437 tons valued at US$86,511,000 in 2009 and 2010, respectively. The sources of crab seeds for farming are from the wild and in recent years, from the hatchery although in small percentage. The overexploitation of mud crabs and habitat losses have resulted in both reduced landings and mean capture size. To stem the wild harvest, the provincial and municipal government along with the Bureau of Fisheries and Aquatic Resources have introduced ordinances that prohibit the gathering and selling of crablets (≤ 3 cm) outside the municipality of origin. This resulted to increased acceptability of hatchery-reared crabs by crab growers. Basic technologies in all phases of culture (hatchery, nursery and grow-out) have been developed. However, there are still several issues that need to be addressed. In the hatchery phase, one of the major causes of low survival are the Molt Death Syndrome in which zoea 5 has difficulty molting to megalopa and diseases due to bacterial and fungal infection in eggs and larvae. The use of antibiotics as treatment for Vibrio spp. has proven to improve larval survival. However, the use of antibiotics can lead to the development of resistant strains of bacteria and abnormalities that become apparent at the juvenile stage. In the nursery phase, economic losses have been attributed to cannibalism. Providing sufficient food and shelters, reducing stocking density, size grading and removal or trimming of claws are the common strategies used to mitigate the high level of cannibalism. Recent findings showed that incorporating tryptophan in the diet can reduce the aggressive behavior of crabs. In the grow-out phase, culture of juvenile crabs to market size with one or two more commodities in earthen brackishwater ponds is the most prevalent practice. Due to the cannibalistic nature of mud crab, polyculture (usually with milkfish and shrimp) pond is carried out. Stocking density of each commodity varies with the size and the number of seed stock available and the abundance of natural food growth in the pond. Culture period ranges from 4-5 months. Monoculture of crabs is usually done for short term culture as in fattening in various systems. Mud crab culture is also integrated with the existing mangroves. Formulated diets have been verified in commercial grow-out ponds and showed promising results. Mud crabs are commonly fed with low value fish, molluscs and other unprocessed natural foods. Mortality in mud crabs in grow-out phase is oftentimes due to the white spot syndrome virus. The domestication of S. serrata has been done at SEAFDEC/AQD. The duration from spawning of the base population to F1 broodstock size was 10-14 months and from F1 to F2 was 11-12 months. Selective breeding of S. serrata is currently being done. The results serve as guide to understand and eliminate the obstacles to broodstock management and seed production. Recently, The Department of Science and Technology has funded the National Mud Crab Science and Technology Program being implemented by SEAFDEC/AQD and University of the Philippines Visayas to refine the existing technologies in all phases of culture and to aggressively promote the establishment of several mud crab hatcheries and nurseries in the Philippines. The Bureau of Fisheries and Aquatic Resources is also implementing the Philippine National Aquasilviculture Program, which includes the rehabilitation of mangrove forests and culture of commercially important aquatic animals including mud crab in established mangrove areas. On-site training on all phases of culture of mud crab has also been done by SEAFDEC/AQD not only in the Philippines but also in other countries like Brunei, Myanmar, India and Timor Leste. With the establishment of several hatcheries and nurseries, there will be sufficient seed stock supply for farming, thereby decreasing the dependence on wild stock.