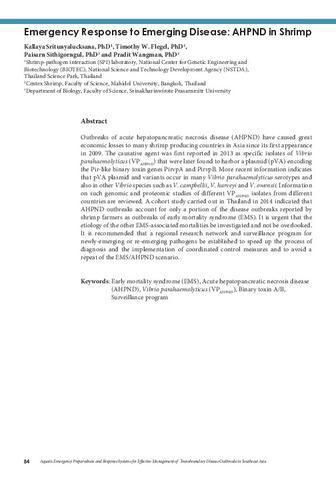 Outbreaks of acute hepatopancreatic necrosis disease (AHPND) have caused great economic losses to many shrimp producing countries in Asia since its first appearance in 2009. The causative agent was first reported in 2013 as specific isolates of Vibrio parahaemolyticus (VPAHPND) that were later found to harbor a plasmid (pVA) encoding the Pir-like binary toxin genes PirvpA and PirvpB. More recent information indicates that pVA plasmid and variants occur in many Vibrio parahaemolyticus serotypes and also in other Vibrio species such as V. campbellii, V. harveyi and V. owensii. Information on such genomic and proteomic studies of different VPAHPND isolates from different countries are reviewed. A cohort study carried out in Thailand in 2014 indicated that AHPND outbreaks account for only a portion of the disease outbreaks reported by shrimp farmers as outbreaks of early mortality syndrome (EMS). It is urgent that the etiology of the other EMS-associated mortalities be investigated and not be overlooked. It is recommended that a regional research network and surveillance program for newly-emerging or re-emerging pathogens be established to speed up the process of diagnosis and the implementation of coordinated control measures and to avoid a repeat of the EMS/AHPND scenario.