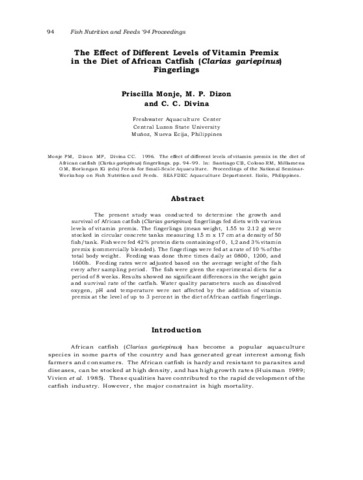 The present study was conducted to determine the growth and survival of African catfish (Clarias gariepinus) fingerlings fed diets with various levels of vitamin premix. The fingerlings (mean weight, 1.55 to 2.12 g) were stocked in circular concrete tanks measuring 1.5 m x 17 cm at a density of 50 fish/tank. Fish were fed 42% protein diets containing of 0, 1,2 and 3% vitamin premix (commercially blended). The fingerlings were fed at a rate of 10 % of the total body weight. Feeding was done three times daily at 0800, 1200, and 1600h. Feeding rates were adjusted based on the average weight of the fish every after sampling period. The fish were given the experimental diets for a period of 8 weeks. Results showed no significant differences in the weight gain and survival rate of the catfish. Water quality parameters such as dissolved oxygen, pH and temperature were not affected by the addition of vitamin premix at the level of up to 3 percent in the diet of African catfish fingerlings.