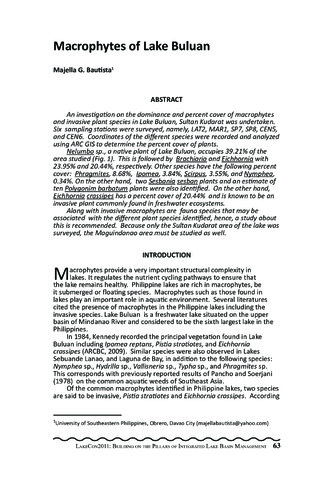 An investigation on the dominance and percent cover of macrophytes and invasive plant species in Lake Buluan, Sultan Kudarat was undertaken. Six sampling stations were surveyed, namely, LAT2, MAR1, SP7, SP8, CEN5, and CEN6. Coordinates of the different species were recorded and analyzed using ARC GIS to determine the percent cover of plants. Nelumbo sp., a native plant of Lake Buluan, occupies 39.21% of the area studied (Fig. 1). This is followed by Brachiaria and Eichhornia with 23.95% and 20.44%, respectively. Other species have the following percent cover: Phragmites, 8.68%, Ipomea, 3.84%, Scirpus, 3.55%, and Nymphea, 0.34%. On the other hand, two Sesbania sesban plants and an estimate of ten Polygonim barbatum plants were also identified. On the other hand, Eichhornia crassipes has a percent cover of 20.44% and is known to be an invasive plant commonly found in freshwater ecosystems. Along with invasive macrophytes are fauna species that may be associated with the different plant species identified, hence, a study about this is recommended. Because only the Sultan Kudarat area of the lake was surveyed, the Maguindanao area must be studied as well.