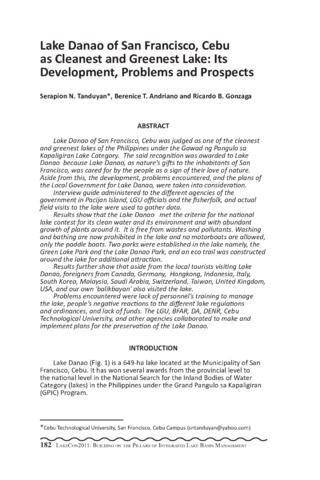 Lake Danao of San Francisco, Cebu was judged as one of the cleanest and greenest lakes of the Philippines under the Gawad ng Pangulo sa Kapaligiran Lake Category. The said recognition was awarded to Lake Danao because Lake Danao, as nature s gifts to the inhabitants of San Francisco, was cared for by the people as a sign of their love of nature. Aside from this, the development, problems encountered, and the plans of the Local Government for Lake Danao, were taken into consideration. Interview guide administered to the different agencies of the government in Pacijan Island, LGU officials and the fisherfolk, and actual field visits to the lake were used to gather data. Results show that the Lake Danao met the criteria for the national lake contest for its clean water and its environment and with abundant growth of plants around it. It is free from wastes and pollutants. Washing and bathing are now prohibited in the lake and no motorboats are allowed, only the paddle boats. Two parks were established in the lake namely, the Green Lake Park and the Lake Danao Park, and an eco trail was constructed around the lake for additional attraction. Results further show that aside from the local tourists visiting Lake Danao, foreigners from Canada, Germany, Hongkong, Indonesia, Italy, South Korea, Malaysia, Saudi Arabia, Switzerland, Taiwan, United Kingdom, USA, and our own 'balikbayan' also visited the lake. Problems encountered were lack of personnel s training to manage the lake, people s negative reactions to the different lake regulations and ordinances, and lack of funds. The LGU, BFAR, DA, DENR, Cebu Technological University, and other agencies collaborated to make and implement plans for the preservation of the Lake Danao.