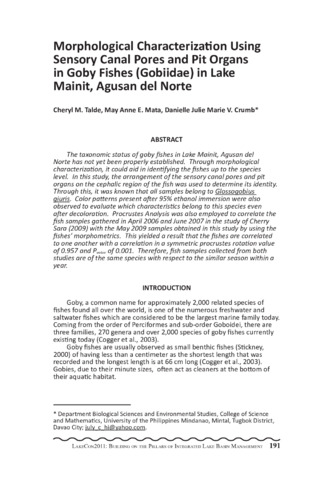 The taxonomic status of goby fishes in Lake Mainit, Agusan del Norte has not yet been properly established. Through morphological characterization, it could aid in identifying the fishes up to the species level. In this study, the arrangement of the sensory canal pores and pit organs on the cephalic region of the fish was used to determine its identity. Through this, it was known that all samples belong to Glossogobius giuris. Color patterns present after 95% ethanol immersion were also observed to evaluate which characteristics belong to this species even after decoloration. Procrustes Analysis was also employed to correlate the fish samples gathered in April 2006 and June 2007 in the study of Cherry Sara (2009) with the May 2009 samples obtained in this study by using the fishes morphometrics. This yielded a result that the fishes are correlated to one another with a correlation in a symmetric procrustes rotation value of 0.957 and Pvalue of 0.001. Therefore, fish samples collected from both studies are of the same species with respect to the similar season within a year.