Hydrological features of Lakes Bito, Mahagnao, and Danao in Leyte 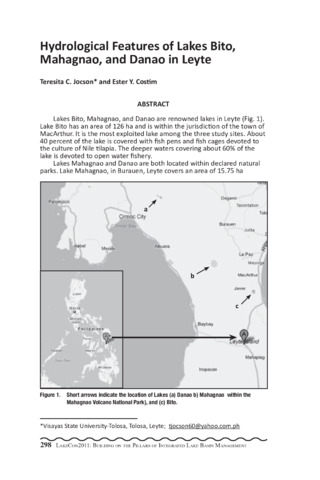 Lakes Bito, Mahagnao, and Danao are renowned lakes in Leyte (Fig. 1). Lake Bito has an area of 126 ha and is within the jurisdiction of the town of MacArthur. It is the most exploited lake among the three study sites. About 40 percent of the lake is covered with fish pens and fish cages devoted to the culture of Nile tilapia. The deeper waters covering about 60% of the lake is devoted to open water fishery. Lakes Mahagnao and Danao are both located within declared natural parks. Lake Mahagnao, in Burauen, Leyte covers an area of 15.75 ha (Francisco, et al., 2001). The whole lake area is devoted to open water fishery, aside from being a source of the micro-hydroelectric power that provides electricity to Barangays Lugsungan, Cansiboy, and Mahagnao. Lake Danao in Ormoc City covers an area of 148 ha. The lake supplies water to the cities of Ormoc and Tacloban. The lake is also developed for tourism, with activities like boating, swimming, and hook and line fishing. There is very limited information about these lakes, with prior studies conducted by Montemayor (1985) and Francisco, et al. (2001). The data obtained was part of a preliminary study on the biodiversity of aquatic flora and fauna of these three lakes. The study was conducted in a period of one year to come up with baseline information about the three lakes. Sampling was conducted once a month in each of the three lakes. Depth, percent transparency, pH level, temperature, and dissolved oxygen (DO) were monitored through a longitudinal survey. Depth was measured using a depth gauge, transparency was monitored using a secchi disc; and pH level was determined using a pen-type pH meter (Milwaukee). Temperature and dissolved oxygen were determined using a DO meter (Cyberscan DO 110). Univariate Analysis of Variance and Tukey HSD were the statistical tools used to analyze the data obtained. Results showed that overall mean depth of water ranged between 1.48 m and 1.90 m; 2.61 m and 4.92; and 2.84 m and 4.11 m in Lakes Bito, Mahagnao, and Danao, respectively (Table 1). Overall mean percent transparency were between 52.59% and 68.06 %; 40.35% and 92.37%; and 63.19% and 97.41 % in Lakes Bito, Mahagnao, and Danao, respectively. Overall mean temperature ranged from 24.99°C to 29.74°C; 20.74°C to 27.32°C; and 19.90°C to 25.60°C in Lakes Bito, Mahagnao, and Danao, respectively. Overall mean DO were between 4.04 mg/l and 10.77 mg/l; 5.37 mg/l and 13.28 mg/l; and 4.93 mg/l and 12.84 mg/l in Lakes Bito, Mahagnao, and Danao, respectively. Overall mean pH were between 6.3 and 8.3; 6.2 and 8.4; and 6.0 and 8.8 in Lakes Bito, Mahagnao, and Danao, respectively (Table 1). There were significant differences (P<0.01) in depth, transparency, temperature, and DO among the three lakes during the study period. No significant differences in pH were observed among the three lakes, although monthly fluctuations within each lake was observed.