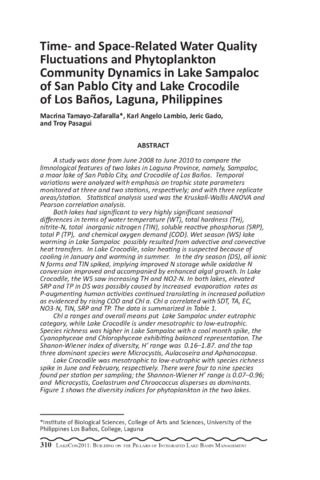 A study was done from June 2008 to June 2010 to compare the limnological features of two lakes in Laguna Province, namely, Sampaloc, a maar lake of San Pablo City, and Crocodile of Los Baños. Temporal variations were analyzed with emphasis on trophic state parameters monitored at three and two stations, respectively; and with three replicate areas/station. Statistical analysis used was the Kruskall-Wallis ANOVA and Pearson correlation analysis. Both lakes had significant to very highly significant seasonal differences in terms of water temperature (WT), total hardness (TH), nitrite-N, total inorganic nitrogen (TIN), soluble reactive phosphorus (SRP), total P (TP), and chemical oxygen demand (COD). Wet season (WS) lake warming in Lake Sampaloc possibly resulted from advective and convective heat transfers. In Lake Crocodile, solar heating is suspected because of cooling in January and warming in summer. In the dry season (DS), all ionic N forms and TIN spiked, implying improved N storage while oxidative N conversion improved and accompanied by enhanced algal growth. In Lake Crocodile, the WS saw increasing TH and NO2-N. In both lakes, elevated SRP and TP in DS was possibly caused by increased evaporation rates as P-augmenting human activities continued translating in increased pollution as evidenced by rising COD and Chl a. Chl a correlated with SDT, TA, EC, NO3-N, TIN, SRP and TP. The data is summarized in Table 1. Chl a ranges and overall means put Lake Sampaloc under eutrophic category, while Lake Crocodile is under mesotrophic to low-eutrophic. Species richness was higher in Lake Sampaloc with a cool month spike, the Cyanophyceae and Chlorophyceae exhibiting balanced representation. The Shanon-Wiener index of diversity, H range was 0.16-1.87. and the top three dominant species were Microcystis, Aulacoseira and Aphanocapsa. Lake Crocodile was mesotrophic to low-eutrophic with species richness spike in June and February, respectively. There were four to nine species found per station per sampling; the Shannon-Wiener H range is 0.07-0.96; and Microcystis, Coelastrum and Chroococcus disperses as dominants. Figure 1 shows the diversity indices for phytoplankton in the two lakes.