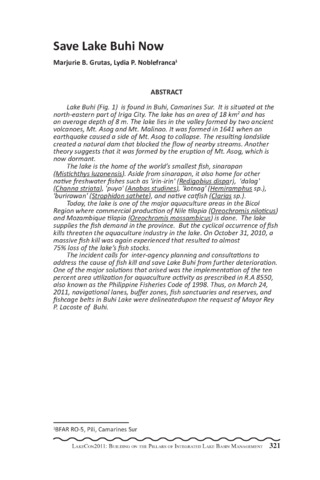 Lake Buhi (Fig. 1) is found in Buhi, Camarines Sur. It is situated at the north-eastern part of Iriga City. The lake has an area of 18 km2 and has an average depth of 8 m. The lake lies in the valley formed by two ancient volcanoes, Mt. Asog and Mt. Malinao. It was formed in 1641 when an earthquake caused a side of Mt. Asog to collapse. The resulting landslide created a natural dam that blocked the flow of nearby streams. Another theory suggests that it was formed by the eruption of Mt. Asog, which is now dormant. The lake is the home of the world s smallest fish, sinarapan (Mistichthys luzonensis). Aside from sinarapan, it also home for other native freshwater fishes such as 'irin-irin' (Redigobius dispar), 'dalag' (Channa striata), 'puyo' (Anabas studines), 'kotnag' (Hemiramphus sp.), 'burirawan' (Strophidon sathete), and native catfish (Clarias sp.). Today, the lake is one of the major aquaculture areas in the Bicol Region where commercial production of Nile tilapia (Oreochromis niloticus) and Mozambique tilapia (Oreochromis mossambicus) is done. The lake supplies the fish demand in the province. But the cyclical occurrence of fish kills threaten the aquaculture industry in the lake. On October 31, 2010, a massive fish kill was again experienced that resulted to almost 75% loss of the lake s fish stocks. The incident calls for inter-agency planning and consultations to address the cause of fish kill and save Lake Buhi from further deterioration. One of the major solutions that arised was the implementation of the ten percent area utilization for aquaculture activity as prescribed in R.A 8550, also known as the Philippine Fisheries Code of 1998. Thus, on March 24, 2011, navigational lanes, buffer zones, fish sanctuaries and reserves, and fishcage belts in Buhi Lake were delineatedupon the request of Mayor Rey P. Lacoste of Buhi.