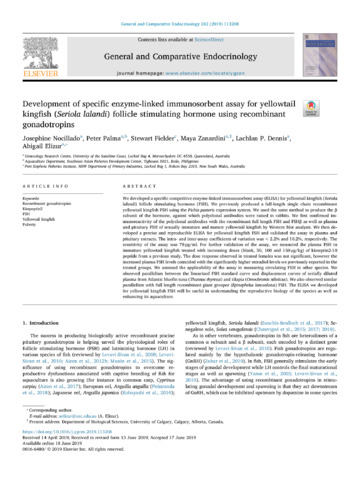 We developed a specific competitive enzyme-linked immunosorbent assay (ELISA) for yellowtail kingfish (Seriola lalandi) follicle stimulating hormone (FSH). We previously produced a full-length single chain recombinant yellowtail kingfish FSH using the Pichia pastoris expression system. We used the same method to produce the β subunit of the hormone, against which polyclonal antibodies were raised in rabbits. We first confirmed immunoreactivity of the polyclonal antibodies with the recombinant full length FSH and FSHβ as well as plasma and pituitary FSH of sexually immature and mature yellowtail kingfish by Western blot analysis. We then developed a precise and reproducible ELISA for yellowtail kingfish FSH and validated the assay in plasma and pituitary extracts. The intra- and inter-assay coefficients of variation was <2.2% and 10.2%, respectively. The sensitivity of the assay was 78 pg/ml. For further validation of the assay, we measured the plasma FSH in immature yellowtail kingfish treated with increasing doses (blank, 50, 100 and 150 µg/kg) of kisseptin2-10 peptide from a previous study. The dose response observed in treated females was not significant, however the increased plasma FSH levels coincided with the significantly higher estradiol levels we previously reported in the treated groups. We assessed the applicability of the assay in measuring circulating FSH in other species. We observed parallelism between the linearized FSH standard curve and displacement curves of serially diluted plasma from Atlantic bluefin tuna (Thunnus thynnus) and tilapia (Oreochromis niloticus). We also observed similar parallelism with full length recombinant giant grouper (Epinephelus lanceolatus) FSH. The ELISA we developed for yellowtail kingfish FSH will be useful in understanding the reproductive biology of the species as well as enhancing its aquaculture.