Recent advances in diagnosis and prevention of fish and shrimp diseases in Southeast Asia: Terminal report of the regional fish disease project on development of fish disease inspection methodologies for artificially-bred seeds funded by the Government of Japan Trust Fund from 2000 to 2004 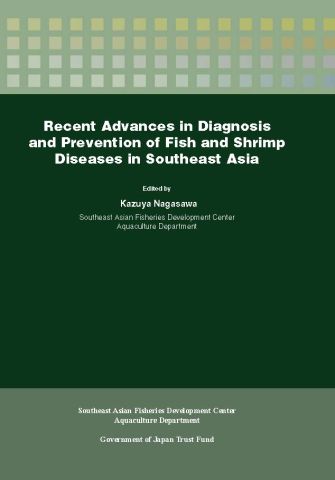 Fish diseases are one of the major constraints and threats to aquaculture production in Southeast Asia. Numerous infectious diseases have been reported from fish and shrimp cultured in this region. Currently, several emerging diseases are also recognized in the region. These diseases cause large-scale mass mortalities of cultured species, inducing devastating losses to the regional aquaculture production. Various chemicals including antibiotics, pesticides, disinfectants and others are often used to control fish diseases in the region. There is, however, a need to ensure that aquaculture products are safe for humans, and the presence of chemical residues in aquaculture products have made a serious, negative impact on international trade in exporting countries. The Aquaculture Department of the Southeast Asian Fisheries Development Center (SEAFDEC) based in Tigbauan, Iloilo, Philippines, has conducted the Regional Fish Disease Project to address fish disease problems and food safety issues in the region with funding from the Government of Japan (GOJ) Trust Fund. Under the title of “Development of Fish Disease Inspection Methodologies for Artificially-Bred Seeds,” the first phase of the project was implemented for five years from 2000 to 2004. During this period, many activities including research, hands-on training, international meetings and extension were conducted. This volume entitled “Recent Advances in Diagnosis and Prevention of Fish and Shrimp Diseases in Southeast Asia” is a terminal report of the Regional Fish Disease Project on “Development of Fish Disease Inspection Methodologies for Artificially-Bred Seeds” funded by the GOJ Trust Fund. This is a compilation of the outcome of various activities conducted from 2000 to 2004. In addition to this report, a number of scientific papers, manuals, proceedings of international meetings and others have been published to disseminate the outputs of the project (see Chapter 4).