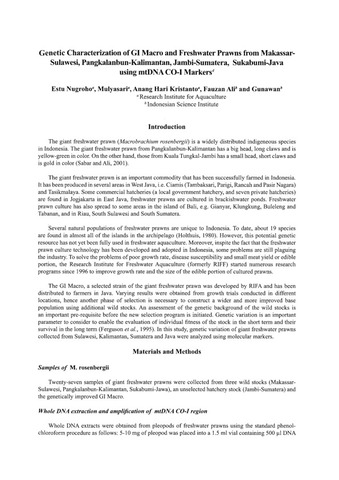 The giant freshwater prawn (Macrobrachium rosenbergii) is a widely distributed indigenous species in Indonesia. The giant freshwater prawn from Pangkalanbun-Kalimantan has a big head, long claws and is yellow-green in color. On the other hand, those from Kuala Tungkal-Jambi has a small head, short claws and is gold in color (Sabar and Ali, 2001). The giant freshwater prawn is an important commodity that has been successfully fanned in Indonesia. It has been produced in several areas in West Java, i.e. Ciamis (Tambaksari, Parigi, Rancah and Pasir Nagara) and Tasikmalaya. Some commercial hatcheries (a local government hatchery, and seven private hatcheries) are found in Jogjakarta in East Java, freshwater prawns are cultured in brackishwater ponds. Freshwater prawn culture has also spread to some areas in the island of Bali, e.g. Gianyar, Klungkung, Buleleng and Tabanan, and in Riau, South Sulawesi and South Sumatera. Several natural populations of freshwater prawns are unique to Indonesia. To date, about 19 species are found in almost all of the islands in the archipelago (Holthuis, 1980). However, this potential genetic resource has not yet been fully used in freshwater aquaculture. Moreover, inspite the fact that the freshwater prawn culture technology has been developed and adopted in Indonesia, some problems are still plaguing the industry. To solve the problems of poor growth rate, disease susceptibility and small meat yield or edible portion, the Research Institute for Freshwater Aquaculture (formerly RIFF) started numerous research programs since 1996 to improve growth rate and the size of the edible portion of cultured prawns. The GI Macro, a selected strain of the giant freshwater prawn was developed by RIFA and has been distributed to farmers in Java. Varying results were obtained from growth trials conducted in different locations, hence another phase of selection is necessary to construct a wider and more improved base population using additional wild stocks. An assessment of the genetic background of the wild stocks is an important pre-requisite before the new selection program is initiated. Genetic variation is an important parameter to consider to enable the evaluation of individual fitness of the stock in the short term and their survival in the long term (Ferguson et al., 1995). In this study, genetic variation of giant freshwater prawns collected from Sulawesi, Kalimantan, Sumatera and Java were analyzed using molecular markers.