Genetic characterization, domestication and improvement of Macrobrachium rosenbergii in the Philippines 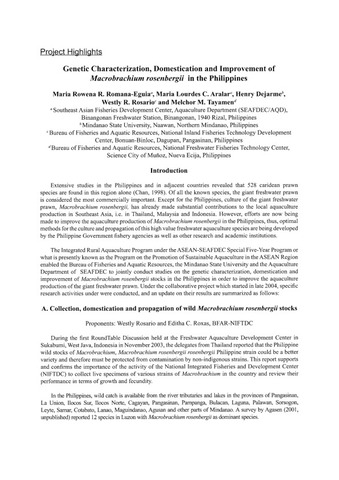 Extensive studies in the Philippines and in adjacent countries revealed that 528 caridean prawn species are found in this region alone (Chan, 1998). Of all the known species, the giant freshwater prawn is considered the most commercially important. Except for the Philippines, culture of the giant freshwater prawn, Macrobrachium rosenbergii, has already made substantial contributions to the local aquaculture production in Southeast Asia, i.e. in Thailand, Malaysia and Indonesia. However, efforts are now being made to improve the aquaculture production of Macrobrachium rosenbergii in the Philippines, thus, optimal methods for the culture and propagation of this high value freshwater aquaculture species are being developed by the Philippine Government fishery agencies as well as other research and academic institutions. The Integrated Rural Aquaculture Program under the ASEAN-SEAFDEC Special Five-Year Program or what is presently known as the Program on the Promotion of Sustainable Aquaculture in the ASEAN Region enabled the Bureau of Fisheries and Aquatic Resources, the Mindanao State University and the Aquaculture Department of SEAFDEC to jointly conduct studies on the genetic characterization, domestication and improvement of Macrobrachium rosenbergii stocks in the Philippines in order to improve the aquaculture production of the giant freshwater prawn. Under the collaborative project which started in late 2004, specific research activities under were conducted, and an update on their results are summarized.