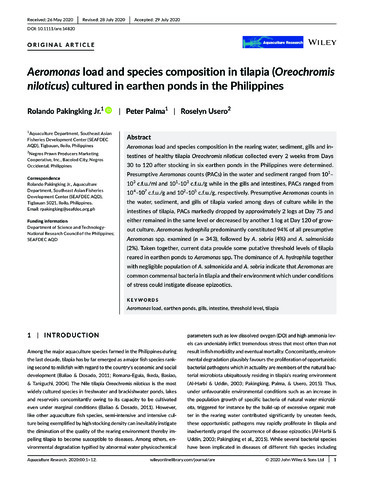 Aeromonas load and species composition in the rearing water, sediment, gills and intestines of healthy tilapia Oreochromis niloticus collected every 2 weeks from Days 30 to 120 after stocking in six earthen ponds in the Philippines were determined. Presumptive Aeromonas counts (PACs) in the water and sediment ranged from 101–103 c.f.u./ml and 101–103 c.f.u./g while in the gills and intestines, PACs ranged from 104–107 c.f.u./g and 102–105 c.f.u./g, respectively. Presumptive Aeromonas counts in the water, sediment, and gills of tilapia varied among days of culture while in the intestines of tilapia, PACs markedly dropped by approximately 2 logs at Day 75 and either remained in the same level or decreased by another 1 log at Day 120 of grow‐out culture. Aeromonas hydrophila predominantly constituted 94% of all presumptive Aeromonas spp. examined (n = 343), followed by A. sobria (4%) and A. salmonicida (2%). Taken together, current data provide some putative threshold levels of tilapia reared in earthen ponds to Aeromonas spp. The dominance of A. hydrophila together with negligible population of A. salmonicida and A. sobria indicate that Aeromonas are common commensal bacteria in tilapia and their environment which under conditions of stress could instigate disease epizootics.