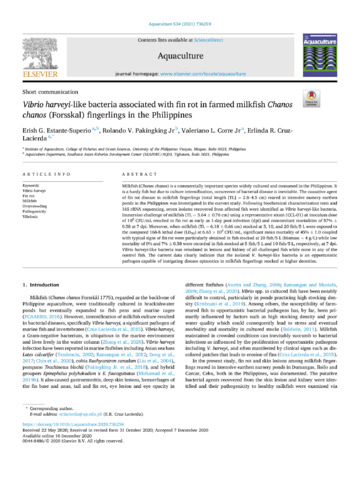 Milkfish (Chanos chanos) is a commercially important species widely cultured and consumed in the Philippines. It is a hardy fish but due to culture intensification, occurrence of bacterial disease is inevitable. The causative agent of fin rot disease in milkfish fingerlings (total length [TL] = 2.8–4.5 cm) reared in intensive nursery earthen ponds in the Philippines was investigated in the current study. Following biochemical characterization tests and 16S rRNA sequencing, seven isolates recovered from affected fish were identified as Vibrio harveyi-like bacteria. Immersion challenge of milkfish (TL = 5.64 ± 0.76 cm) using a representative strain (CCL-01) at inoculum dose of 108 CFU/mL resulted in fin rot as early as 1-day post-infection (dpi) and concomitant mortalities of 57% ± 0.58 at 7 dpi. Moreover, when milkfish (TL = 6.18 ± 0.66 cm) stocked at 5, 10, and 20 fish/5 L were exposed to the computed 168-h lethal dose (LD50) at 6.63 × 104 CFU/mL, significant mean mortality of 45% ± 1.0 coupled with typical signs of fin rot were particularly obtained in fish stocked at 20 fish/5 L (biomass = 4 g/L) while low mortality of 0% and 7% ± 0.58 were recorded in fish stocked at 5 fish/5 L and 10 fish/5 L, respectively, at 7 dpi. Vibrio harveyi-like bacteria was reisolated in lesions and kidney of all challenged fish while none in any of the control fish. The current data clearly indicate that the isolated V. harveyi-like bacteria is an opportunistic pathogen capable of instigating disease epizootics in milkfish fingerlings stocked at higher densities.