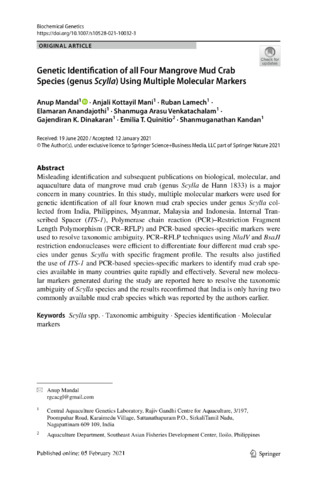 Misleading identification and subsequent publications on biological, molecular, and aquaculture data of mangrove mud crab (genus Scylla de Hann 1833) is a major concern in many countries. In this study, multiple molecular markers were used for genetic identification of all four known mud crab species under genus Scylla collected from India, Philippines, Myanmar, Malaysia and Indonesia. Internal Transcribed Spacer (ITS-1), Polymerase chain reaction (PCR)–Restriction Fragment Length Polymorphism (PCR–RFLP) and PCR-based species-specific markers were used to resolve taxonomic ambiguity. PCR–RFLP techniques using NlaIV and BsaJI restriction endonucleases were efficient to differentiate four different mud crab species under genus Scylla with specific fragment profile. The results also justified the use of ITS-1 and PCR-based species-specific markers to identify mud crab species available in many countries quite rapidly and effectively. Several new molecular markers generated during the study are reported here to resolve the taxonomic ambiguity of Scylla species and the results reconfirmed that India is only having two commonly available mud crab species which was reported by the authors earlier.