Engineering aspects and problems in the design and construction of fishpens and fish cages in Laguna Lake, Philippines 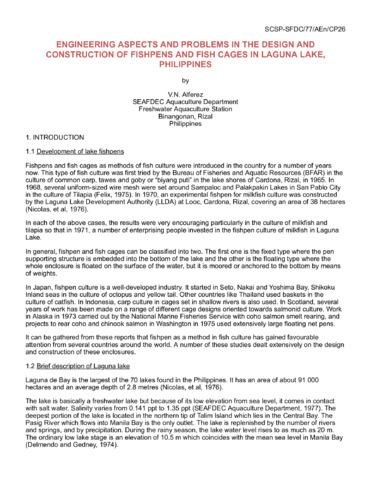 The profitability of the fishpen industry in Laguna de Bay cannot be over-emphasized. However, a good engineering design must be prepared, in addition to the feasibility study in production and marketing. The destructive effect of the past typhoons which hit the Philippines especially in 1974 has shown the susceptibility of these fishpens to failures. To protect the industry from collapsing due to these calamities, better enclosure designs have to be developed. It is therefore hoped that the two design models presented will stimulate a more rigorous investigation of the present system. The SEAFDEC Freshwater Aquaculture Station will be putting up some experiments on the design models herein discussed. It is also recommended that studies be made on the wave characteristics of the lake water and water hyacinth movements all year round. The extensive use of floating cages for fish culture in other countries has proved to be successful. In the Philippines, this kind of fish culture was introduced in the culture of Tilapia in the lakes of San Pablo City, Laguna, notably in the Bunot Lake. Because of this, the Freshwater Station has included in its projects a study of the design and construction of floating cages with emphasis on the kinds of materials for floatation and support system.