Response of phytoplankton to temporal changes in nutrients in Taal Lake, Batangas, Philippines 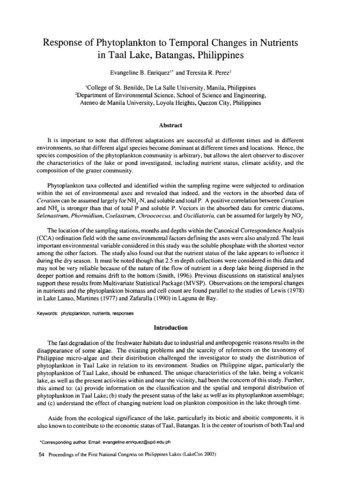 It is important to note that different adaptations are successful at different times and in different environments, so that different algal species become dominant at different times and locations. Hence, the species composition of the phytoplankton community is arbitrary, but allows the alert observer to discover the characteristics of the lake or pond investigated, including nutrient status, climate acidity, and the composition of the grazer community. Phytoplankton taxa collected and identified within the sampling regime were subjected to ordination within the set of environmental axes and revealed that indeed, and the vectors in the absorbed data of Ceratium can be assumed largely for NH4-N, and soluble and total P. A positive correlation between Ceratium and NH4 is stronger than that of total P and soluble P. Vectors in the absorbed data for centric diatoms, Selenastrum, Phormidium, Coelastrum, Chroococcus, and Oscillatoria, can be assumed for largely by NO3. The location of the sampling stations, months and depths within the Canonical Correspondence Analysis (CCA) ordination field with the same environmental factors defining the axes were also analyzed. The least important environmental variable considered in this study was the soluble phosphate with the shortest vector among the other factors. The study also found out that the nutrient status of the lake appears to influence it during the dry season. It must be noted though that 2.5 m depth collections were considered in this data and may not be very reliable because of the nature of the flow of nutrient in a deep lake being dispersed in the deeper portion and remains drift to the bottom (Smith, 1996). Previous discussions on statistical analyses support these results from Multivariate Statistical Package (MVSP). Observations on the temporal changes in nutrients and the phytoplankton biomass and cell count are found parallel to the studies of Lewis (1978) in Lake Lanao, Martines (1977) and Zafaralla (1990) in Laguna de Bay.