Towards increased production of milkfish fry in the Philippines: SEAFDEC/AQD technology through the lens 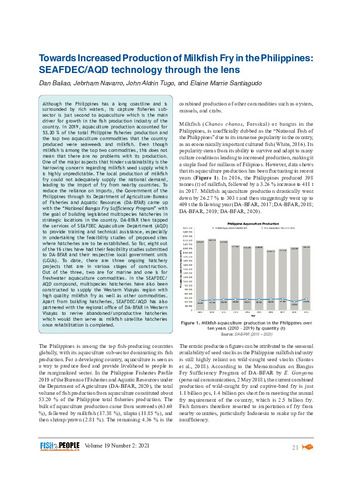 Although the Philippines has a long coastline and is surrounded by rich waters, its capture fisheries subsector is just second to aquaculture which is the main driver for growth in the fish production industry of the country. In 2019, aquaculture production accounted for 53.20 % of the total Philippine fisheries production and the top two aquaculture commodities that the country produced were seaweeds and milkfish. Even though milkfish is among the top two commodities, this does not mean that there are no problems with its production. One of the major aspects that hinder sustainability is the harrowing concern regarding milkfish seed supply which is highly unpredictable. The local production of milkfish fry could not adequately supply the national demand, leading to the import of fry from nearby countries. To reduce the reliance on imports, the Government of the Philippines through its Department of Agriculture-Bureau of Fisheries and Aquatic Resources (DA-BFAR) came up with the “National Bangus Fry Sufficiency Program” with the goal of building legislated multispecies hatcheries in strategic locations in the country. DA-BFAR then tapped the services of SEAFDEC Aquaculture Department (AQD) to provide training and technical assistance, especially in undertaking the feasibility studies of proposed sites where hatcheries are to be established. So far, eight out of the 16 sites have had their feasibility studies submitted to DA-BFAR and their respective local government units (LGUs). To date, there are three ongoing hatchery projects that are in various stages of construction. Out of the three, two are for marine and one is for freshwater aquaculture commodities. In the SEAFDEC/AQD compound, multispecies hatcheries have also been constructed to supply the Western Visayas region with high quality milkfish fry as well as other commodities. Apart from building hatcheries, SEAFDEC/AQD has also partnered with the regional office of DA-BFAR in Western Visayas to revive abandoned/unproductive hatcheries which would then serve as milkfish satellite hatcheries once rehabilitation is completed.