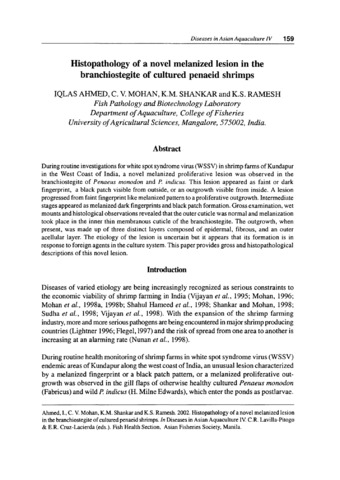 During routine investigations for white spot syndrome virus (WSSV) in shrimp farms of Kundapur in the West Coast of India, a novel melanized proliferative lesion was observed in the branchiostegite of Penaeus monodon and P. indicus. This lesion appeared as faint or dark fingerprint, a black patch visible from outside, or an outgrowth visible from inside. A lesion progressed from faint fingerprint like melanized pattern to a proliferative outgrowth. Intermediate stages appeared as melanized dark fingerprints and black patch formation. Gross examination, wet mounts and histological observations revealed that the outer cuticle was normal and melanization took place in the inner thin membranous cuticle of the branchiostegite. The outgrowth, when present, was made up of three distinct layers composed of epidermal, fibrous, and an outer acellular layer. The etiology of the lesion is uncertain but it appears that its formation is in response to foreign agents in the culture system. This paper provides gross and histopathological descriptions of this novel lesion.