Diseases of seabass, Lates calcarifer, larvae from hatcheries in Indonesia 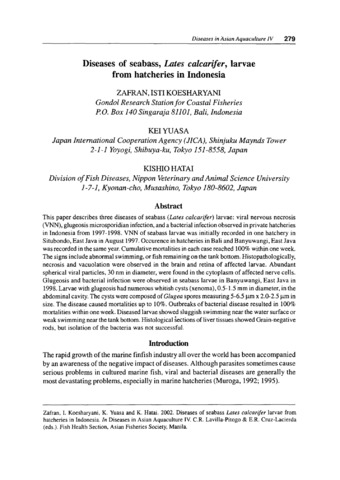 This paper describes three diseases of seabass (Lates calcarifer) larvae: viral nervous necrosis (VNN), glugeosis microsporidian infection, and a bacterial infection observed in private hatcheries in Indonesia from 1997-1998. VNN of seabass larvae was initially recorded in one hatchery in Situbondo, East Java in August 1997. Occurence in hatcheries in Bali and Banyuwangi, East Java was recorded in the same year. Cumulative mortalities in each case reached 100% within one week. The signs include abnormal swimming, or fish remaining on the tank bottom. Histopathologically, necrosis and vacuolation were observed in the brain and retina of affected larvae. Abundant spherical viral particles, 30 nm in diameter, were found in the cytoplasm of affected nerve cells. Glugeosis and bacterial infection were observed in seabass larvae in Banyuwangi, East Java in 1998. Larvae with glugeosis had numerous whitish cysts (xenoma), 0.5-1.5 mm in diameter, in the abdominal cavity. The cysts were composed of Glugea spores measuring 5-6.5 µm x 2.0-2.5 µm in size. The disease caused mortalities up to 10%. Outbreaks of bacterial disease resulted in 100% mortalities within one week. Diseased larvae showed sluggish swimming near the water surface or weak swimming near the tank bottom. Histological sections of liver tissues showed Grain-negative rods, but isolation of the bacteria was not successful.