The status of aquatic animal health in Cambodia 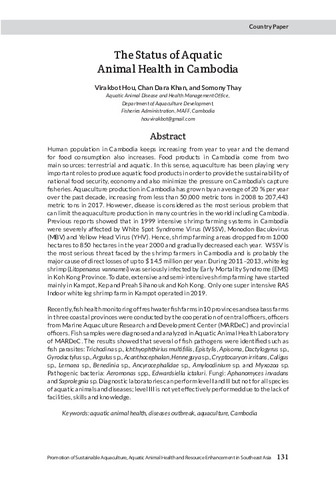 Human population in Cambodia keeps increasing from year to year and the demand for food consumption also increases. Food products in Cambodia come from two main sources: terrestrial and aquatic. In this sense, aquaculture has been playing very important roles to produce aquatic food products in order to provide the sustainability of national food security, economy and also minimize the pressure on Cambodia’s capture fisheries. Aquaculture production in Cambodia has grown by an average of 20 % per year over the past decade, increasing from less than 50,000 metric tons in 2008 to 207,443 metric tons in 2017. However, disease is considered as the most serious problem that can limit the aquaculture production in many countries in the world including Cambodia. Previous reports showed that in 1999 intensive shrimp farming systems in Cambodia were severely affected by White Spot Syndrome Virus (WSSV), Monodon Baculovirus (MBV) and Yellow Head Virus (YHV). Hence, shrimp farming areas dropped from 1,000 hectares to 850 hectares in the year 2000 and gradually decreased each year. WSSV is the most serious threat faced by the shrimp farmers in Cambodia and is probably the major cause of direct losses of up to $ 14.5 million per year. During 2011–2013, white leg shrimp (Litopenaeus vannamei) was seriously infected by Early Mortality Syndrome (EMS) in Koh Kong Province. To date, extensive and semi-intensive shrimp farming have started mainly in Kampot, Kep and Preah Sihanouk and Koh Kong. Only one super intensive RAS Indoor white leg shrimp farm in Kampot operated in 2019. Recently, fish health monitoring of freshwater fish farms in 10 provinces and sea bass farms in three coastal provinces were conducted by the cooperation of central officers, officers from Marine Aquaculture Research and Development Center (MARDeC) and provincial officers. Fish samples were diagnosed and analyzed in Aquatic Animal Health Laboratory of MARDeC. The results showed that several of fish pathogens were identified such as fish parasites: Trichodina sp., Ichthyophthirius multifiliis, Epistylis, Apisoma, Dactylogyrus sp., Gyrodactylus sp., Argulus sp., Acanthocephalan, Henneguya sp., Cryptocaryon irritans, Caligus sp., Lernaea sp., Benedinia sp., Ancyrocephalidae sp., Amyloodinium sp. and Myxozoa sp. Pathogenic bacteria: Aeromonas spp., Edwardsiella ictaluri. Fungi: Aphanomyces invadans and Saprolegnia sp. Diagnostic laboratories can perform level I and II but not for all species of aquatic animals and diseases; level III is not yet effectively performed due to the lack of facilities, skills and knowledge.