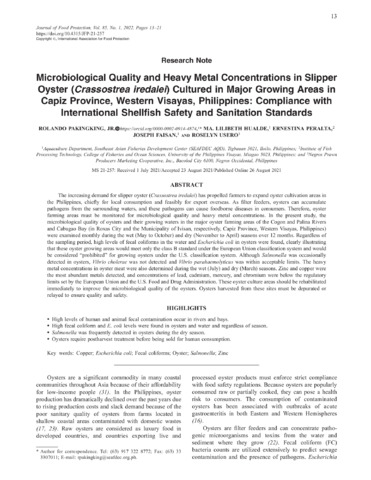 The increasing demand for slipper oyster (Crassostrea iredalei) has propelled farmers to expand oyster cultivation areas in the Philippines, chiefly for local consumption and feasibly for export overseas. As filter feeders, oysters can accumulate pathogens from the surrounding waters, and these pathogens can cause foodborne diseases in consumers. Therefore, oyster farming areas must be monitored for microbiological quality and heavy metal concentrations. In the present study, the microbiological quality of oysters and their growing waters in the major oyster farming areas of the Cogon and Palina Rivers and Cabugao Bay (in Roxas City and the Municipality of Ivisan, respectively, Capiz Province, Western Visayas, Philippines) were examined monthly during the wet (May to October) and dry (November to April) seasons over 12 months. Regardless of the sampling period, high levels of fecal coliforms in the water and Escherichia coli in oysters were found, clearly illustrating that these oyster growing areas would meet only the class B standard under the European Union classification system and would be considered “prohibited” for growing oysters under the U.S. classification system. Although Salmonella was occasionally detected in oysters, Vibrio cholerae was not detected and Vibrio parahaemolyticus was within acceptable limits. The heavy metal concentrations in oyster meat were also determined during the wet (July) and dry (March) seasons. Zinc and copper were the most abundant metals detected, and concentrations of lead, cadmium, mercury, and chromium were below the regulatory limits set by the European Union and the U.S. Food and Drug Administration. These oyster culture areas should be rehabilitated immediately to improve the microbiological quality of the oysters. Oysters harvested from these sites must be depurated or relayed to ensure quality and safety.