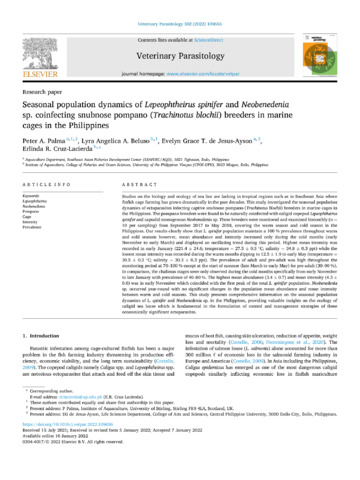 Studies on the biology and ecology of sea lice are lacking in tropical regions such as in Southeast Asia where finfish cage farming has grown dramatically in the past decades. This study investigated the seasonal population dynamics of ectoparasites infecting captive snubnose pompano (Trachinotus blochii) breeders in marine cages in the Philippines. The pompano breeders were found to be naturally coinfected with caligid copepod Lepeophtheirus spinifer and capsalid monogenean Neobenedenia sp. These breeders were monitored and examined bimonthly (n = 10 per sampling) from September 2017 to May 2018, covering the warm season and cold season in the Philippines. Our results clearly show that L. spinifer population maintain a 100 % prevalence throughout warm and cold seasons however, mean abundance and intensity increased only during the cold months (early November to early March) and displayed an oscillating trend during this period. Highest mean intensity was recorded in early January (221.4 ± 24.6; temperature = 27.5 ± 0.3 °C; salinity = 34.8 ± 0.3 ppt) while the lowest mean intensity was recorded during the warm months dipping to 12.5 ± 1.9 in early May (temperature = 30.5 ± 0.3 °C; salinity = 30.3 ± 0.3 ppt). The prevalence of adult and pre-adult was high throughout the monitoring period at 70–100 % except at the start of summer (late March to early May) for pre-adult (30–90 %). In comparison, the chalimus stages were only observed during the cold months specifically from early November to late January with prevalence of 40–80 %. The highest mean abundance (3.4 ± 0.7) and mean intensity (4.3 ± 0.6) was in early November which coincided with the first peak of the total L. spinifer population. Neobenedenia sp. occurred year-round with no significant changes in the population mean abundance and mean intensity between warm and cold seasons. This study presents comprehensive information on the seasonal population dynamics of L. spinifer and Neobenedenia sp. in the Philippines, providing valuable insights on the ecology of caligid sea louse which is fundamental in the formulation of control and management strategies of these economically significant ectoparasites.