Collection of wild stocks, domestication and propagation of Macrobrachium rosenbergii 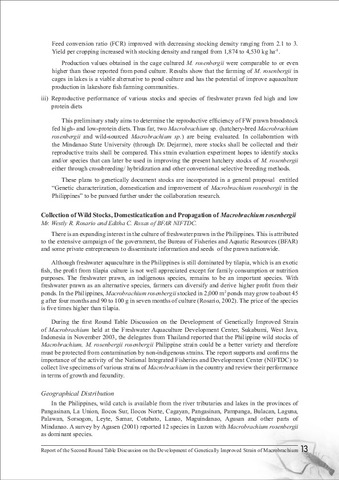 There is an expanding interest in the culture of freshwater prawn in the Philippines. This is attributed to the extensive campaign of the government, the Bureau of Fisheries and Aquatic Resources (BFAR) and some private entrepreneurs to disseminate information and seeds of the prawn nationwide. Although freshwater aquaculture in the Philippines is still dominated by tilapia, which is an exotic fish, the profit from tilapia culture is not well appreciated except for family consumption or nutrition purposes. The freshwater prawn, an indigenous species, remains to be an important species. With freshwater prawn as an alternative species, farmers can diversify and derive higher profit from their ponds. In the Philippines, Macrobrachium rosenbergii stocked in 2,000 m2 ponds may grow to about 45 g after four months and 90 to 100 g in seven months of culture (Rosario, 2002). The price of the species is five times higher than tilapia. During the first Round Table Discussion on the Development of Genetically Improved Strain of Macrobrachium held at the Freshwater Aquaculture Development Center, Sukabumi, West Java, Indonesia in November 2003, the delegates from Thailand reported that the Philippine wild stocks of Macrobrachium, M. rosenbergii rosenbergii Philippine strain could be a better variety and therefore must be protected from contamination by non-indigenous strains. The report supports and confirms the importance of the activity of the National Integrated Fisheries and Development Center (NIFTDC) to collect live specimens of various strains of Macrobrachium in the country and review their performance in terms of growth and fecundity.